Full Assurance is a key goal for the SMDA Scheme and a milestone that we hope is achieved towards the end of this year.

In order to aid this process, please see that we have created a new Full Assurance Baseline and infographic which we hope will encourage device manufacturers to submit their devices for Full Assurance testing.

Full Assurance continues to cover credit and pre-payment testing on both CSP Central and South and CSP North and can only be achieved if devices have successfully passed testing without any device specific tolerable issues (issues that can be resolved by the device manufacturer and have been previously tolerated by the SMDA Management Panel Sub-Group).

Any tolerated common issues found on a device awarded Full Assurance will be listed on the manufacturer’s Statement of Assurance which can be requested by Suppliers and MAPs. 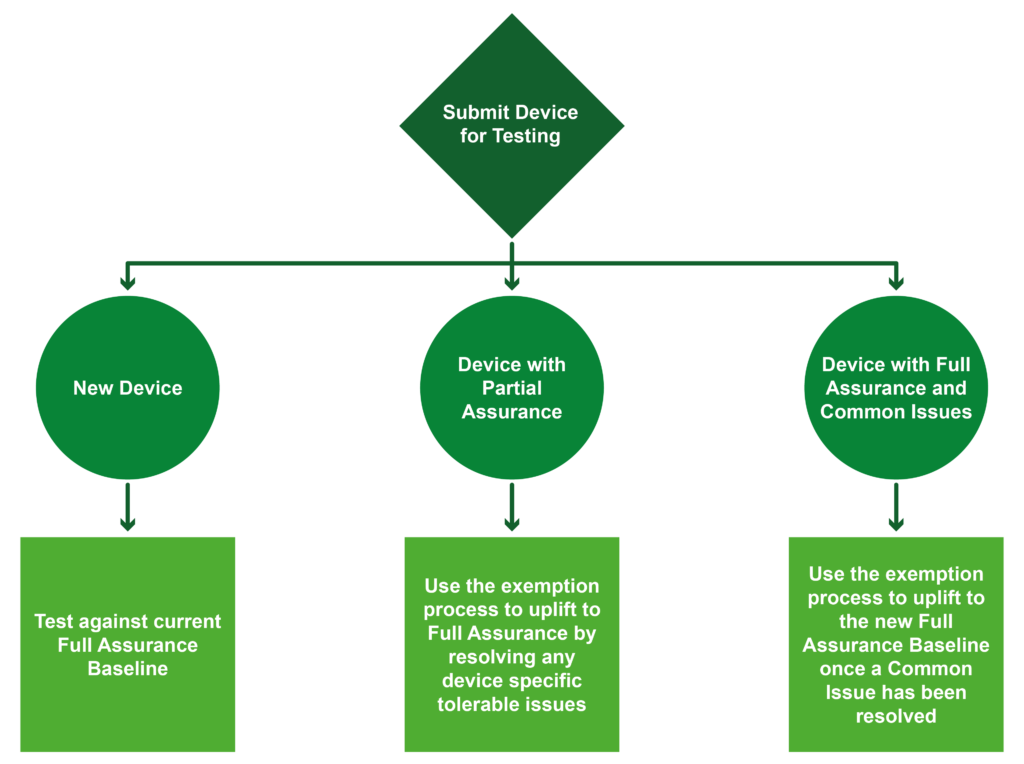 The Scheme continues to develop to ensure that all industry members benefit from the Scheme with the main focus on transitioning into the Smart Energy Code (SEC), a consultation to review the Schemes testing scope and progression to Full Assurance.

Feedback from the SEC MP 111 (SMDA Budget Amendments) consultation expressed a need for the scope of the SMDA Scheme to be reviewed and as such the Scheme have developed a consultation which was published on Monday 16th August 2021.

The consultation contains four questions which we are seeking views on:

Members are requested to respond to the consultation by submitting their responses by email to smdaso@gemserv.com by 5pm Friday 1st October 2021.

The Scheme continues to transition into the SEC. Regular updates are provided to the SEC Panel and several meetings are attended by a SMDA representative.

Full Assurance is available and is expected to be awarded towards the end of 2021 to devices that have successfully passed testing with no device specific tolerable issues.

The SMDA Test House (Critical Software) are pleased to advise that the Smart Meter testing capacity within the SMDA Lab has increased so that more devices can be tested at the same time.

When the SMDA Scheme was initially founded, manufacturers were invited to submit their devices as part of the Early Mover Model (EMM) process. These devices were submitted for testing first, paving the way to assurance as Test Reference Devices and were provided with funding to cover the cost of first round of testing and their first round of re-testing.

Given the Scheme’s progress to achieving Full Assurance and the transition into the SEC, the SMDA Company Board agreed that this funding would be closed to allow the SMDA Company to wind down.

EMM Manufacturers were contacted in July and encouraged to contact the Test House to commit to continue testing on their current device or submit new Firmware for testing. All funding has now been utilities.

The Scheme are working to introduce testing on WNC Comms Hubs and Dual Band Comms Hubs as well as uplifting to November 20 and November 21 SEC Releases.

As a result of the BEIS recommendations, SEC MP 111 (SMDA Budget Amendments) was raised and implemented on 22nd January 2021. Feedback from the consultation expressed a need for the scope of the SMDA scheme to be reviewed and as such the SMDA Scheme have developed a consultation which can be found here.

The consultation contains four questions seeking the views on:

Members are requested to respond to the consultation by submitting their responses by email to smdaso@gemserv.com by 5pm Friday 1st October 2021. It’s vital that we receive your response so that the views of SMDA members can be fully considered.

If you have any questions please contact us at smdaso@gemserv.com.

Following the approval of SMDA SEC Modification MP111, the Scheme is transitioning into the Smart Energy Code (SEC). As this transition secures future funding of the Scheme’s fixed costs, and we have begun to work with our newly appointed test house Critical Software, we are pleased to announce that this has resulted in a substantial decrease in the SMDA testing fees.

SMDA’s funding model has been adapted to align with SECAS processes, therefore the testing fees are now split into charges for those who are SEC Parties and those who are non-SEC Parties.

The new test fees are as follows for credit and pre-payment testing in the Central/ South and North region, against November 19 Release.

As part of the above, each of the testing fees includes a number of days effort associated with completing a full set of testing once, together with a small allowance to repeat some tests (for example, where retests are required due to the testing environment).

In addition, the fees also now set out a day rate associated with retesting as well as uplifts of firmware under the exemption process. These daily rates have been reduced down from the previously published rates of £1,250 to £1,200 a day.

Please be advised that with the introduction of WNC Communication Hubs into SMDA testing these charges may vary, though this is expected to be minimal change.

Following on from recent announcements, the SMDA Sub Committee and Scheme Operator are pleased to announce that Critical Software has been appointed as the new SMDA Test House, and will be providing SMDA testing services from 1st April 2021. This means that there will be no disruption in services following NMi’s exit on 31st March 2021.

We would like to thank NMi for all its hard work over the last five years helping to push the Scheme forward, and for facilitating an efficient handover with minimal disruption. During its tenure as the SMDA Test House, NMi has overseen the testing and assurance of 18 devices onto the Device Assurance Register (DAR), working closely with the Scheme Operator, device manufacturers and the smart metering industry to tackle complex challenges. A further 11 devices are in-flight, demonstrating the strength of the Scheme, with more devices expected to come forward in the coming months.

In order to facilitate Critical Software being able to continue testing of devices currently going through SMDA testing, device manufacturers with devices currently under test are requested to confirm they are happy to novate their existing testing agreements with NMi, covered in the quotations issued when testing requests were made, over to Critical Software on the same terms. This will also enable agreed fees to remain intact, and all technical data to be provided to Critical Software of tests that have been completed so as to allow for a seamless transition. In order to confirm you are happy for your existing agreement to novate over to Critical Software, please respond with your confirmation via email to the SMDA Scheme Operator (SMDASO@Gemserv.com) so this can be progressed accordingly.

In addition to the above, we are also pleased to announce that throughout the last month, business has continued as normal, with a further device extending its assurance on the DAR.

With SEC Modification SECMP 111 also being implemented, the Scheme is now on a firm footing to continue to provide vital services in support of the Smart Meter roll out in GB.

Should members have any questions with regards to the above, please do get in touch with the Scheme Operator accordingly.

Issued on behalf of

We hope you are staying safe and well.

While 2020 was an eventful year for all, a lot has already happened in 2021. A number of activities have been taken forward resulting in some changes in the Scheme. During these changes the Scheme continues to provide a high-quality service to all members, with minimal disruption to manufacturers with devices currently undergoing SMDA testing.

The Scheme was pleased to announce that the SMDA SEC Modification MP111 was approved by Ofgem on Friday 22nd January 2021. This modification secures the future funding of the fixed costs of the Scheme. The Scheme would like to thank members for their support and assistance during this process and SMDA is now in the transition phases of being integrated into the SEC.

The governance structure of the Scheme will remain largely the same. The SMDA Co. Board members have become the SMDA Sub-Committee reporting to the SEC Panel. The SMDA Management Panel members have also become members of the Management Panel Sub-Group reporting to the SMDA Sub-Committee. Until the SMDA Company winds down, the SMDA Co. Board will continue to meet, in order to fulfil their Director responsibilities.

The Scheme looks forward to members continuous support during the transition, which will result in an improved Scheme, with scope and testing fees due to be reviewed shortly, to benefit all.

As SMDA Members will be aware, NMi will no longer be providing SMDA testing and assurance services from 1st April 2021. The SMDA Scheme Operator (SO) and NMi are working together to ensure a smooth transition to a new Test House (TH) from April, including all inflight processes. Services until 31st March 2021 continue as normal.

The Scheme is in the process of contracting with an interim TH who will continue testing from 1st April 2021. This is great news and means that there will be no disruption to devices currently going through testing and the Scheme continues to operate as normal.

NMI and the Scheme has agreed an exit management plan to facilitate a smooth transition to the new arrangements. As part of the plan, NMi and the Scheme will also look to ensure that test results and related information are transferred to the new TH, so testing can continue as set out initially with NMi. There is no intention for any testing to be repeated and all relevant information, including the status of test case completion, will be transitioned to the new TH, provided the manufacturer has given NMi permission to do so.

We can also confirm that testing fees agreed between NMi and the device manufacturer will not change. When devices complete the test plan the remaining test fee (i.e. 50% of the TH test fee) set out in the original quote will be due. We will confirm those charging arrangements once the new TH is confirmed.

The Scheme recommends that new devices are submitted to start testing when confirmation of the new TH arrangements are in place. Up to 31st March 2021 we would ask manufacturers to continue to contact NMi for any enquiries around inflight testing of their devices.

To support the transition to a new TH, device manufacturers currently undergoing testing will be contacted by the SO with the current status of SMDA testing of their devices. This is to ensure manufacturers are appraised of the progress and to confirm their position for continuing testing of device(s) once the new TH arrangements are in place. In particular, we’d be grateful if manufacturers could confirm whether they intend to complete SMDA testing and whether they would like this to happen within the next 3, 6 or 9 months.

The main goal of the Scheme is to provide Full Assurance to devices that have undergone testing to ensure they are both interchangeable and interoperable with no tolerated issues. The Scheme has made crucial steps towards achieving this goal including:

The SO has provided members with a view of when currently tolerated issues are expected to be resolved. Following positive feedback from the Management Panel Sub-Group, we are in the process of finalising a resolution plan and a subsequent path to Full Assurance covering all regions, across Credit and Prepayment functionality.